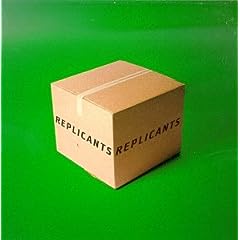 It was still a year away from Tool's epic offering Aenima. It was a year before Failure's fantastic Fantastic Planet. During the Tool's recording process, Paul D'Amour left the band and joined Ken Andrews and Greg Edwards from Failure, along unknown keyboardist Chris Pittman (who would go on to join GNR). The foursome went on to form the first grunge cover band (unless you you count Pearl Jam's live act). The murky covers of Neil Young, Pink Floyd, The Cars, and David Bowie are propelled by Andrews' signature style, sounding more like Failure than Tool. Even when Maynard steps into lend some vocal screaming to McCartney's Silly Love Songs it adds atmosphere more than direction. The album has fallen into obscurity, being nothing more than a Wikipedia entry. The label no longer produces the album, so to find it, you'll have to scour your local used CD store (or ebay) and keep your fingers crossed.

The album has been discontinued...but worth seeking out. Check it out for only $5.99 used at BullMoose.

Posted by acompleteunknown at 4:20 PM

Email ThisBlogThis!Share to TwitterShare to FacebookShare to Pinterest
Labels: The Replicants