The 11 Best Songs By Muse 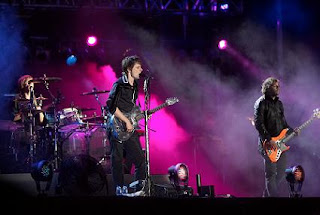 The second best day of the year for music fans is coming.  Black Friday 2012 aka Record Store Day Part Deux.  It's much smaller than the typical record store day but almost as exciting:  Acetate Velvet Underground, Rolling Stones EP, David Bowie Picture Disc, and a ridiculously cool Beach Boys single set.  And even though the amount of releases is minor in comparison to the amount of releases in the Spring, it's ironic because it's still more product than was featured in the first couple Record Store Days.  All this means is the longer that Record Store Day exits the bigger it will get.

But there's a more important implication here.  While everyone in the music industry is whining that music sales are down...a holiday that celebrates buying physical musical releases keeps getting larger and more popular every year.  The demand is actually going up.  At what point is the industry going to wake and realize it's not necessarily the internet that's causing the problem...maybe it's the shitty uninteresting music that they're putting out?  Oh wait...that couldn't be the problem...because then the music industry would have to take responsibility for their own demise.  Maybe they should talk to Metallica about how that worked out for them.

Posted by acompleteunknown at 6:57 PM 4 comments:

The 11 Best Songs By Interpol

At Piedmont high school in Northern California, the varsity boys created a Fantasy Slut League.  Each girl in the high school is given a number (a point value).  Then the boys draft the girls to their team and try to hook up with them.  The boys with the most points at the end of the season gets a PS3.  Of course they got caught and the list was made public.  This brings up many questions, if you're a father and your daughter ends up on the list...are you more upset at the boys for creating the league or if they give your daughter a bad score? Also, what's the waiver wire situation like?  Is there a bench?  Are there trades...and if so, is there a deadline?  Maybe I should be making jokes about a serious situation.  But seriously, do you think they ran this through Yahoo or CBS sports?

Here are the 11 Best Songs By Interpol:

Email ThisBlogThis!Share to TwitterShare to FacebookShare to Pinterest
Labels: Interpol

The Unknown: That Noise

I don't do a lot of posts for unknown bands or songs despite the title of the blog...and the tons of unsigned bands sending me material.  Mainly, I don't have time to sift through the piles of garbage MP3s that I get sent.  I don't have enough time to listen to music I like let alone music I don't want to listen to.  So, when something grabs me, it means something.  I've known That Noise's singer for years and anything he puts out is always a reason to tune in.  They're Southern California locals and are always playing and I highly suggest checking them out live. If you go to their website now...you can get their EP for free.  Honestly, how can you beat that?

You can find them at the following links:  Facebook and Thatnoisemusic.com

Check out their video below.  And let me know what you think.

Posted by acompleteunknown at 12:35 PM No comments:

Email ThisBlogThis!Share to TwitterShare to FacebookShare to Pinterest
Labels: That Noise

I know some troll is going to go all haywire because these songs are not all purely solo songs by Benjamin Gibbard.  It's amazing how loose the rules on the internet are for conduct...but how everyone out there holds websites up to extreme scrutiny.  And not just about facts...about whether our facts abide by their own personal opinions.  Like I'm supposed to make my lists a certain way because some yahoo in Nebraska doesn't like my list of Martin L. Gore songs includes covers.  Like really?  Why does that matter?  It's like the debate.  Binders full of women?  Who cares?  It's funny for like two seconds.  But I've had to spend all day reading stupid Facebook posts making jokes about it.  People need to get lives and obsessing over minutiae.  That said, I'm going to go play some Angry Birds.

Here are the 11 Best Solo Songs By Benjamin Gibbard:

The 11 Best Songs By Pinback

The video for Gangnam Style has 430 million views on Youtube.  That's more views than all of Pinback's videos combined.  It makes me wonder if I could give Psy a run for his money with my own Youtube Channel.  From now on I'll be posting videos of the songs I find on Youtube.  Some will be straight up album tracks (usually hard to find B-sides) other tracks will be live tracks from obscure gigs or even big time shows.  I want to have fun on it.  So click, enjoy, and share.

That said...I will still include the random MP3 here and there...but more of a great thing is always a great thing.

Here are the 11 Best Songs By Pinback:
Buy Pinback's new album, Information Retrieved...now!! (only $3.99 for a limited time)

Email ThisBlogThis!Share to TwitterShare to FacebookShare to Pinterest
Labels: Pinback

The 11 Best Songs By Deadmau5

With the first of the Presidential elections past this week, we're entering the critical time of the election.  And the lack of interest in the election could not be higher.  I just think people are getting too wise to the candidates empty promises...along with getting sick with both sides "fact checkers" disproving everything the other one said.  By now, we all know that the candidates will say whatever to get elected...then do the opposite once they're in office.  Therefore, I promise a new way to decide who is President.  I call it:  "Feats of Excellence." The candidates all battle in a competition-style set of contests, to decide who is most in touch with today's population.  Here's what I've come up with so far:  A pop culture trivia quiz hosted by TMZ, Best of 5 battle in the Halo arena, Skateboard Half-Pipe routine scored by Tony Hawk, Iron Chef competition hosted by Bourdain and Batali, Karaoke contest with song choices by the cast of Glee, Speed texting, and a finale where both candidates get 15 minutes to battle it out as DJs.  First of all, I think this type of competition would be a lot more fun...and second of all, let's be honest, it probably matters just as much.

Email ThisBlogThis!Share to TwitterShare to FacebookShare to Pinterest
Labels: Deadmau5

The 11 Best Songs By Band of Horses

My biggest issue with Band of Horses is that they've never been brave enough to break out of their melodic My Morning Jacket-lite mode.  Don't get me wrong, they make great music.  I've just always felt like their music was never that inspired to be different...their music was always safe.  There's solace in taking the safe road.  You don't risk losing it all...but you're never going to make it big either.  Finally, this record, BOH sounds like their tired of living quietly in everyone else's shadow and are ready to rock.  The first song on the new album is bigger, braver, louder, ballsier than anything else they've ever done.  If this new sound loses some long time fans...then fuck em...they were never true fans to begin with because BOH is ready to hit their stride.  You're either with them or you can go buy the new Kelly Clarkson.

Here are the 11 Best Songs By Band of Horses: