The 11 Best Songs By Neneh Cherry

Everybody loves a comeback.  And of all people, I don't think anyone expected it out of Neneh Cherry.  For all intensive purposes, Cherry has been known to most of the world as a one-hit wonder.  Don't get offended by the term...it's really just a mainstream label of exclusion.  Pavement is a one-hit wonder by mainstream's measure.  To Cherry's fans, they knew she was more talented and creative than her pop radio status.  What has to be the most rewarding feeling is that Cherry's return to music after 18 years is being welcomed with open arms.  Axl Rose didn't even feel this much love on his 18-year hiatus.  As good as Buffalo Stance was, it wrongly pushed attention away from Cherry's true style.  She tripped more than she hipped when she hopped.  Fair weather fans didn't get that.  Massive Attack producer 3D figured that out on the song Manchild. On the new album, Cherry has finally settled into her true groove and her audience may be finally ready to embrace her musical soul. Here are the 11 Best Songs By Neneh Cherry: Buy Neneh Cherry's new album, The Blank Project...now!!
Posted by acompleteunknown at 9:58 PM No comments:

It's been six years since a proper Beck release.  Although there hasn't been an officially slated album, Beck has been rather busy over the past half decade putting out more material in just six years than he did in his previous 10 years.  Since 2008, Beck created his "Record Club" where he gave away five full length albums covering the likes of the Velvet Underground, Leonard Cohen, INXS, Skip Spence, and the legendary Yanni all for free.  He produced three albums for iconic artists Stephen Malkmus, Thurston Moore, and Charlotte Gainsbourg.  He also was the main songwriter behind Sex Bob-Omb, the fictional band from the cult classic film, Scott Pilgrim Vs. The World.  That's nine albums in six years.  But that's not all.  Beck's put out more than that.  He has soundtrack songs, B-sides, stand alone singles, duets, tributes, and compilation tracks, which come together to form a bonus never before heard album...until now.  In honor of Beck's formal return, here's a look back at what he's been doing up until now.
Beck - Six Years
Buy Beck's new album, Morning Phase...now!!!

Posted by acompleteunknown at 9:58 PM No comments:

The 11 Best Songs By William Fitzsimmons

I'm getting a little sick of the new Facebook trend with everyone taking tests about what they really or where they really should be living.  I can pretty much give you the answer to every questionnaire you might take regarding what fictional character you are from any TV show, space movie, or book trilogy.  The answer...NONE of them.  You're none of them because they are all fake made up characters with unrealistic features.  You're not Harry Potter because he a wizard and wizards aren't real.  You're not Jennifer Aniston from Friends because she doesn't have a job and can afford a $4000 a month apartment in NYC.  You're not the 70s rock band Led zeppelin because they are a four person rock band and one of them is dead.  Stop trying to be someone else and just be proud of yourself.
You know who is proud of himself?  William Fitzsimmons.  He isn't trying to look trendy.  In fact, if anything, he's trying to look anything but.  Fitz is confident in himself and in his music.  He doesn't need to wear Dudley Do Right's hat or piss in a potted plant.  He just makes good, angelic, heart-felt music...and if that's not good enough for you...then he doesn't need you.
Here are the 11 Best Songs By William Fitzsimmons:
Buy William Fitzsimmons new album, Lions...now!!!
Posted by acompleteunknown at 11:54 PM No comments:

The 11 Best Songs By Phantogram

There's no better kick to a rock band's music credibility than to be invited to guest on a hip hop album. Phantogram didn't get ask to guest on one song, they were asked to guest on three...and not just by any street poet, they were asked to guest on an album by one of the greatest hip hop artists of all time, Big Boi of Outkast.  One of their duets, CPU, may easily be the best solo song that Big Boi has ever done.  Phantogram keeps getting better with every release; maturing, refining, and expanding with every song.  Soon, it will be Big Boi guesting on Phantogram's album, giving him more music cred. Here are the 11 Best Songs By Phantogram: Buy Phantogram's new album, Voices...now!!
Posted by acompleteunknown at 11:06 PM No comments:

It's a stretch to call the Broken Bells an unknown act but with only one other album and a 4-song EP, there's barely enough songs to do a top 11 list without it being purely comprised of the debut album's tracklist.  This album has been on repeat in my car for the past month.  It's fantastic even though it's getting mediocre reviews.  I think the critics are just idiots...or basketball referees...same difference.  Since everyone knows who they are then I don't need to explain to you why the lead singer of the Shins and Danger Mouse making music together is an all encompassing great duo.  Instead, I'm going to pimp myself out.  Currently, my book The 111 Best Music Lists of the 2000s is available on Kindle for 99 cents.  That's less than a dollar (for all you readers who ditched math).  But it will only be 99 cents for another week before it goes back up to its normal $2.99.  So get it now, and always have something to read on your phone, or tablet, or laptop. 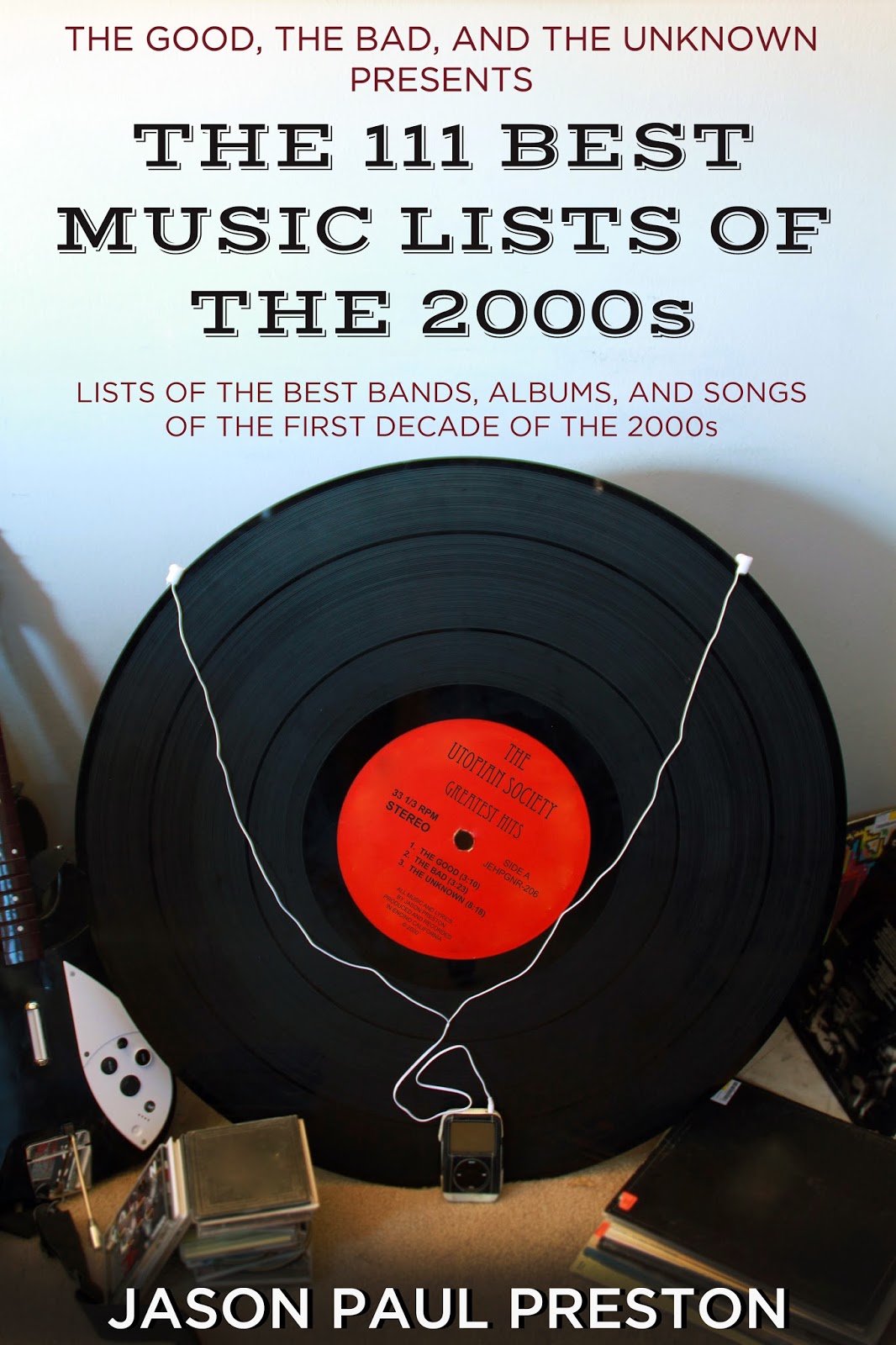 Buy Broken Bells, After The Disco...now!!
Posted by acompleteunknown at 12:08 AM No comments:

The 11 Best Songs By Cibo Matto 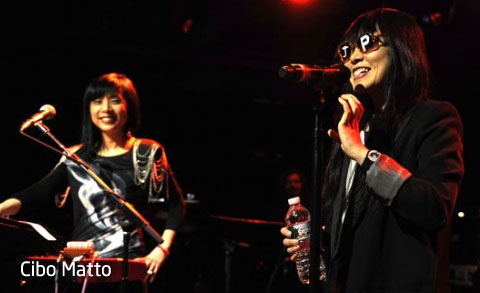 In 1999, Cibo Matto released their spectacular sophomore album, Stereotype A.  It didn't sound like anything else out there, which only elevated why it was so brilliant.  It was like Cibo Matto didn't actually belong.  You didn't really know where they came from and you didn't really care.  They could funk like the Beastie Boys and zone out like Massive Attack.  What didn't make sense together on paper sounded perfect bumping from our stereos.  That's why when they broke up, it wasn't too surprising since it was like they weren't really supposed to exist in the first place. One of the few bands I never thought would ever get back together, has returned with their first album of new material in 15 years.  Whereas before they sounded like they came out of nowhere, now they sound like they never left.  Cibo Matto has made a career out of making their own music, their own way, when they want, and wherever they decide to land. Here are the 11 Best Songs By Cibo Matto: Buy Cibo Matto's new album, Hotel Valentine...now!
Posted by acompleteunknown at 12:18 AM No comments:

The 11 Best Songs By The Bombay Bicycle Club 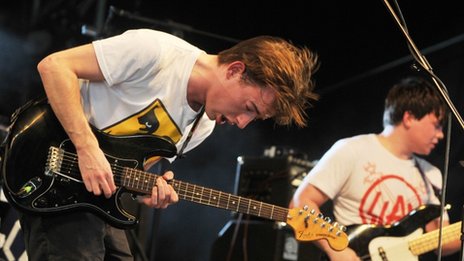 There's been quite an uproar over the Red Hot Chili Peppers performance at the Super Bowl...or as Axl Rose puts it, the world largest karaoke!  Though most people aren't upset that the RHCP played second fiddle to Bruno Mars, they're more upset that the Chili Peppers were fake playing their instruments while mimicking along to pre-recorded audio.  It wasn't a live performance, it was a dance number.  You can't blame the NFL for being a little cautious.  It was Janet Jackson's notorious nip slip at the Super Bowl half time show that changed TV decency until Miley Bieber came along.  And the Chili Peppers, they're the band known for wearing their socks on their penises and walking around in the street.  Penis socks = pre-recorded audio.  Despite the fair sense of worry, does it make it right that the Chili Peppers faked it?  Was it a real performance?
Let's put it in perspective.  What if the Super Bowl was pre-recorded?  What if the game was pre-determined?  What if the Super Bowl winner was decided ahead of time and the teams just pretended to play the game?  Would the game still be worth watching?  Would you care if your team won?  Or would you leave your Super Bowl party early to make it home to beat the traffic?
Here are the 11 Best Songs By The Bombay Bicycle Club:
Buy Bombay Bicycle Club's new album, So Long, See You Tomorrow...now!
Posted by acompleteunknown at 10:12 PM No comments:

The 11 Best Songs By The Autumn Defense