The 11 Best Songs By The Monkees 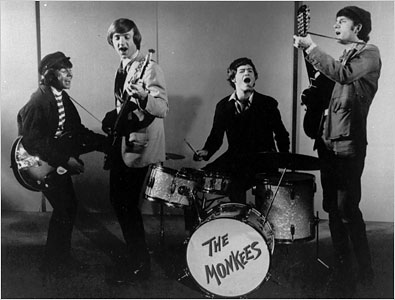 The Monkees were never taken seriously as musicians but the music they made was universally loved.  When they debuted, many of their peers considered them a joke.  They were a watered down knock-off of Beatlemania.  A cheap magician's trick on the American public.  Five decades later, the joke's on everyone else.  The Monkees may not be the greatest rock n roll band...they may not even crack the top 100...200...maybe even 500.  But the one thing they are is iconic.  And that's something very few bands have ever achieved.

Here are 11 Best Songs By The Monkees:

Buy music by the Monkees...now!
Posted by acompleteunknown at 11:56 PM No comments:

Email ThisBlogThis!Share to TwitterShare to FacebookShare to Pinterest
Labels: The Monkees

The 11 Best Songs By Cursive I've been slow on the draw this month...but it's not my fault.  I blame the lack of quality music from our rock n roll vets. Outside of Van Halen...February has been a slow month for artists with solid resumes.  There have been some strong releases which I promise to get to at the end of the week for an early 2012 recap, but there haven't a lot great releases by experienced artists.  I'm not sure why Jan-Mar tend to be the dumping grounds for music.  I would think with a new year, labels would be vying for setting the stage for a new sound.  Right now...Van Halen is owning it!  A band who has been dormant for almost 30 years is now the big dog on campus.  It didn't matter that their album came out in February.  It only mattered that it came out.  Like they said in the movie Sideways, it isn't the day you decide to drink the nice bottle of wine that makes it important.  The day you drink the wine is what makes the day important.  Music should be the same.  It's not the release date that matters...only that the album is being released.

The 11 Best Songs By Cursive:

Email ThisBlogThis!Share to TwitterShare to FacebookShare to Pinterest
Labels: Cursive

The 11 Best Songs By Slayer

This past weekend was the Hollywood rock stars' excuse to throw lavish parties...better known to us common  people as the Grammys.  Probably the least credible award show on the planet but strangely over the past few years, it's become the most watchable of all the award shows.  Since they've stopped giving out awards during the telecast and focused more on filling the show with plenty of live performances, it's been surprisingly watchable.  Also, they've stopped catering to the 14-year-old American Idol audience.  With the Beach Boys, Glen Campbell, Tony Bennett, and Paul McCartney it was an odd irony that the Grammys focused so much on saluting the music industry's rock n roll roots while it still seemed stuck nominating current popular albums over truly ground breaking material.  The Foo Fighters and Bon Iver getting huge nods was pretty cool.  And did anyone notice that Isaac Brock of Modest Mouse got nominated for best rap song?  I get Adele's huge sweep of the awards...even though I think the album is a bit overrated.  When Arcade Fire won last year...I thought Grammy might have seen the light.  But when the announcements came out this year and Kanye's album was not nominated so they could ensure that subpar albums by Rihanna and Lady Gaga got noticed, I once again lost faith...at least in the Grammys...but not in music.  Dave Grohl saved that show.  Dave might be single handedly bringing rock back.  He's the only one who got a standing ovation for his speech.  He's the only person that performed THREE TIMES.  And he did it all wearing a Slayer t-shirt.  Long Live Dave Grohl!

Here are the 11 Best Songs By Slayer:

Buy Slayer Albums now!!!
Posted by acompleteunknown at 8:48 AM 1 comment:

The 11 Best Songs By Whitney Houston I honestly have to say I was never a fan.  But I did respect her.  The woman could sing.  I also can't deny her impact on music and society.  But because of my lack of knowledge on the subject...I had to call in an expert opinion to give a true fan's perspective.  Thanks to Sonny for the list.

Here are the 11 Best Songs By Whitney Houston:

Posted by acompleteunknown at 10:30 PM 2 comments:

Hell has frozen over.

Here are the 11 Best Songs By Van Halen:

Buy the new Van Halen album, A Different Kind of Truth...now!!!
Posted by acompleteunknown at 12:06 AM No comments:

Thirty-five years into their epic ground-breaking career Rush is still not in the rock n roll Hall of Fame.  Whoever thought when we reached Rush Day (2-1-12) four decades after the release of their album, 2112, that Rush would not only still be working men...not only would they still be a spirit of radio to be reckoned with...but that would still not have received the Limelight they deserve from the rock n roll community.  There's really no excuse, especially when bands like Donovan, Dr. John, John Melloncamp and ABBA are getting in before them.  Nothing wrong with these other bands...but more influential than Rush?  Really?

This spring a new Rush album is coming...but until then...let's take a look back at their first decade of work before we celebrate the next one.