The 11 Best Songs By Jeff The Brotherhood 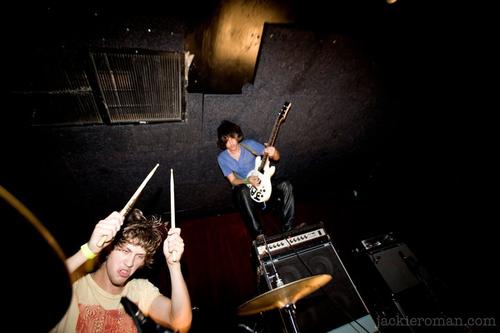 Back in the days of Dazed and Confused when teenagers hid in their parents' wood-paneled basements with green shag carpets, smoking pot and staring at lava lamps...they imagined bands making music that stretched their minds whether they were actually listening to music or still just staring at the lava lamps because side one of their record ended and no one was sober enough to get up and move the needle.  JTB is a band that was born 30 years too late.   For Record Store Day they put out an album that split a 20-minute jam over two sides.  They didn't have to do that.  They could have put the whole song on one side.  They didn't choose not to do it because it didn't make sense...they didn't it because it was the perception that they didn't give a shit.  You may think that JTB doesn't give a shit.  Sometimes music shouldn't give a shit.  When you give a shit...you get hair gel.  When you don't give a shit you get naked babies in swimming pools.  But moves like this aren't careless...they're calculated.  Image is everything.  If you want to look like you don't give a shit...you have to work hard at not giving a shit.  That's why they split up their song.  Because every person who bought the vinyl sat back and thought to themselves how bold it was for them to do it.  Despite it seeming like they're playing the game (and they kind of are) this is how great leaps and bounds are made.  By making conscious efforts to portray their image in the way people want to perceive them...you keep your audience's attention...you keep them sitting up and wanting more.


Here are the 11 Best Songs By Jeff The Brotherhood:


Buy Jeff The Brotherhood's new album, Hypnotic Nights...now!!
Posted by acompleteunknown at 1:19 AM

Email ThisBlogThis!Share to TwitterShare to FacebookShare to Pinterest
Labels: Jeff The Brotherhood

Very entertaining blog you got going here..glad I found it!