The 11 Best Songs By TV On the Radio 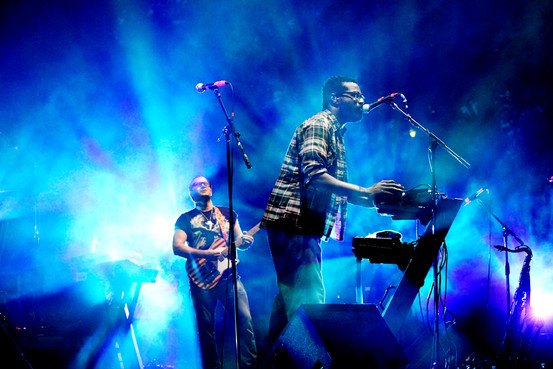 It's December, which means it's time for the onslaught of best of lists.  They've been pouring on hot and heavy over the past few days.  I will get to my annual best of list this week...including my massive 111 best of list with help from all you pretty people.  But I like to wait a couple weeks and scour other "best of" lists in case there's an album out there I've missed.  You never know...the new Smashing Pumpkins and Charli XCX are supposedly pretty epic.  Here's the last of my catch-up list My first introduction to TV on The Radio was on a bachelor party trip about 10 years ago.  Strangely, that marriage is over but TVOTR is still rocking stronger than ever.  When I first heard the feedback-laden caterwaul that would become TVOTR's staple sound it made my skin crawl in the way a trailer for an exciting new movie can give you a rush.  (think the Millenium Falcon racing onto the screen in the new Star wars trailer)  Sadly, I was the only one on the trip who loved what we were listening to.  After three songs from Desparate Youth, the guys in the car voted to remove the CD and move onto something more palpable like...Dave Matthews (yes, it was hell).  All I wanted to do was get home so I could listen to the album...but I was stuck at the bachelor party enduring fancy dinners, drinking, and strip clubs.  Even though Tom Petty may disagree, the waiting isn't always the hardest part. Here are the 11 Best Songs By TV On The Radio: Buy TV On The Radio's new album, Seeds!!!

Don't forget to check out our blog's awesome book The 111 Best Lists of the 2000s.  Available now!  (featuring TV On The Radio)
Posted by acompleteunknown at 2:02 PM

Email ThisBlogThis!Share to TwitterShare to FacebookShare to Pinterest
Labels: TV on the Radio