The 11 Best Songs By The Silversun Pickups 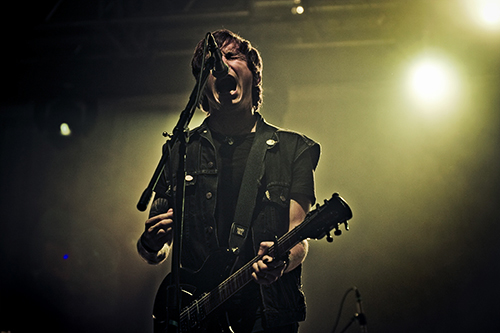 Here's the deal about this post which kind of indicative of my life right now.  I ranked the songs on Tuesday.  I put it together on Wednesday.  And I'm finally addressing the post tonight (Friday).  I had every intention of doing a post each night this week, but then craziness happened at work being a hands-on parent is sometimes important...plus things like sleep and eating, and not necessarily in that order.  I guess it's fitting with the Silversun Pickups that I address this.  I've had this band pushed on me for a long time and have never given them a fair listen until recently.  It wasn't because I didn't like them...it was that I just never had the time to fully listen to them.  I always thought they were just some jangly indie rock band with a loose obsession for Billy Corgan.  But with the lack of strong music coming out this year...I've finally had the time to go back and explore those bands who have fallen through the cracks.  The Pickups are my favorite so far.  The Smashing Pumpkins influence is there...Jimmy Chamberlain's ghost might as well be sitting behind the drum kit.  But aside from a few stray melodies here and there, that's where the SP influence ends.  I hear more Sunny Day Real Estate and Triple Fast Action in their music than 90s grunge.  Honestly, I hear more 80s song structures in their music than anything from the 90s. Regardless of who influenced them, they are one of the most interesting rock bands out there.  They manage to weave together complex rock into short blasts of audio pleasure.  The only negative thing I have to say about them is that I wish I more time to listen to them sooner.

And here's what's even more disturbing, I finished this post Friday night...forgot to post it and am finally getting to it Saturday morning.

These guys are great - and they really grow on you. Glad to see you put "Broken Bottles" up there - hard to believe it was a castoff from their second album! And the new one is incredibly mature and a lot of growth from them.

Sometimes you just need some loud guitars and Foo Fighters won't do. When that happens, the Pickups are my go to...

having home is in this place is good but if anyone wants to buy cheap homes at the village of pinecrest fl visit:Pinecrest Real Estate

Three Seed is their best song. How does it not even make your list??