11 Good Albums from the Past Couple Months 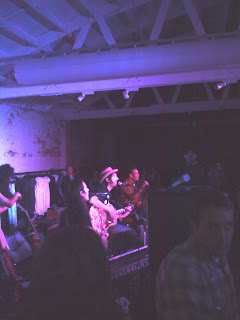 Sorry I've been on hiatus as of late.  Had some family stuff come up.  Followed by the Giants unbelievably making it to the World Series...and winning.  A work crisis.  And finally topped it off with some good old fashioned stomach flu.  There's one thing I realized while having my untimely bought with the stomach flu...there's a band, an album, or a song for every situation.  As I slowly recovered from my annoying illness after wallowing on the floor in crippling pain.  I was able to get onto my computer for a few minutes to check some emails...and play some Facebook games (need to have priorites, right?).  My itunes popped on with an album I had been listening to recently...Fistful of Mercy.  For some reason, at that moment, while every noise...light...movement...shake of my body made me want to run to the bathroom and pray to an unHoly devil...that album hit the spot.  It was the perfect momentarily distraction.

The reason the album was up on my computer was because I was lucky enough to attend Fistful of Mercy's private "first live show ever" last week.  For those unfamiliar with the band, it's Ben Harper, Joseph Arthur, and Dhani Harrison.  I can't say enough good things about the band...and would have done a more formal list if this hadn't been their first album.  That said, there have been a few new albums over the past couple of months that did not get a list since there were not enough songs by the band to do a proper list yet.  Therefore, here's a nod to them.

PS.  Pardon my crappy cellphone camera picture...but that is a shot from the show.

11 Good Albums Worth Checking Out From the Past Couple Months:

Buy these albums and more...here.
Posted by acompleteunknown at 8:03 PM

I'm slowly making my way through this list, checking out samples. I remember when I was much younger, like 11 or 12 and I got violently ill and also couldn't listen to any music except for the Alanis Morissette "jagged little pill" cd and half of silverchair's "frogstomp" without getting horrible headaches. I also remember throwing up and it looking like beans, which made me never want beans for years and years.

With that aside, check out White Denim's new album that they put up for free (with a nice support button next to it).
http://whitedenimmusic.com

I found their album "Fits" at my local record shop and it was a double cd that included their first album for 12.99! freakin' deal. Also, I would like to report that the new Old 97's record is probably my favorite of the bunch, although I noticed some backlash on forums the other week when searching for the amazon & itunes bonus tracks.