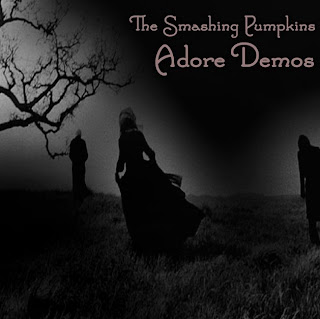 Adore came out when I was in college.  No other album in my collegiate career or for that foreseeable future caused more arguments than this album.  With Mellon Collie, the Pumpkins were the unstoppable force who had taken over rock music.  After they kicked out the best working drummer of the day, they turned their sound on its head and did the unthinkable...they rejected rock music and put out an electronic album.  Whether you were a Pumpkin fanatic or a Corgan hater (and there are plenty) no one knew why they chose to do this.  This was a big mystery.  And no matter how many discussions we had about the band, the question of why this choice was made was always left unresolved.  Some people thought Billy did it because he didn't want to become the next Cobain and blow his brains out...therefore he wanted to fail.  Others thought he did because he thought he was the next Cobain and could do anything he wanted and still succeed.  Corgan had also just lost his mother and one theory suggested he wanted to re-invent who he was.  Another theory had to do with ex-drummer Jimmy Chamberlain.  That theory suggested that Billy Corgan was so arrogant that he purposely made an electronic album just to show Jimmy how little they needed him.  Because of this, a rumor floated around that there was a version of Adore that existed with drums instead of a drum machine.  Though that album never actually surfaced (I guess we'll have to wait for the reissue for that), there is a demo session that exists that does have some of the Adore songs featuring drums...along with a couple cuts that didn't make the album.  It's not exactly the Holy Grail we were looking for in college but it's still a very solid listen.

Here are is the Smashing Pumpkins - Adore Sessions:


Buy the Smashing Pumpkins reissues for Gish and Siamese Dream...now!!!
Posted by acompleteunknown at 8:50 PM