The 11 Best Non-Album Tracks By Soundgarden 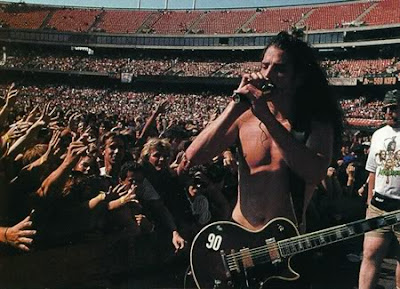 When albums are given the ever-to-often "remastered" treatment, it's not the remastering that we get excited about.  I have yet to hear a remaster that has improved on the original.  Sometimes the mix is just different...and that's fine...but when they take out all the background noise and heighten all the levels, it makes it sound less human and less warm.  The only thing we truly care about when remasters come out are the bonus tracks and unreleased material.  Soundgarden's 4-disc set promises just that.  This is the only reason to get "remastered" sets.  These sets are a behind-the-scenes look into the making of pivotal albums.  And if you don't have this in your set...then your set is basically a remix album.  Nothing more.
Here are the 11 Best Non-Album Tracks By Soundgarden:
Buy Soundgarden's 20th Anniversary release of Superunknown...now!!!

Posted by acompleteunknown at 5:39 PM

Email ThisBlogThis!Share to TwitterShare to FacebookShare to Pinterest
Labels: Soundgarden