The 11 Best Songs By Nirvana 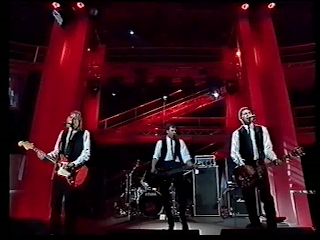 Last night I saw Paul McCartney perform live on Hollywood Blvd.  It was a surreal event with the streets closed down and a giant stage in the middle of the road.  This was the first of two live concerts for the Jimmy Kimmel show.  Monday night featured Sir Paul while Tuesday night would host Justin Timberlake.  I was the only one in my office who made the walk down to see Paul perform live.  Everyone else in the office chose to wait and see Justin Timberlake the next night.  When talking about Paul, there was even one girl in my office who said, "I don't even know any of his songs."  It wasn't until we had to explain to her that he used to sing for the Beatles that she finally acknowledged that she "guesses" she knows who he is.  After squeezing my way onto a balcony overlooking the street I was treated to one of the greatest rock n roll artists of all time...for free.  Perks of working in Hollywood.  One of the most amazing moments of the night was during "Hey Jude."  Now if you've never been to Hollywood Blvd. then let me explain to you that it's an amalgam of tourists, Angelenos, amateur hip hop artists trying to sell their rap CDs, bums, crazy drug addicts, and street people dressed up like your favorite movie personalities like Marilyn Monroe and Chewbacca. When "Hey Jude" started playing, everyone was singing along: the rich, the poor, and the guy dressed like Jack Sparrow. This one song transcended every era, every nationality, every walk of life.  It is bigger than iconic.  It defines iconic.  This ordinary man wrote a song that every man, woman, and child knows.  This song is a piece of our lives.  It is a piece of us.  It is a part of the tapestry of our universe.  This is the power one song has to bind us together.

Here are the 11 Best Songs By Nirvana:

Email ThisBlogThis!Share to TwitterShare to FacebookShare to Pinterest
Labels: Nirvana