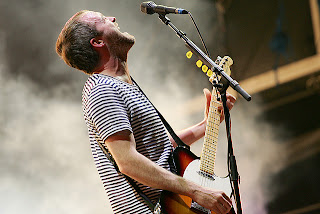 No one considers the art of the B-Side a bigger asset than the band Travis. Here's a band that not only turns out some of the most collectable B-sides in the music industry (they cover everyone from The Band to Queen to Britney Spears) they are probably one of the few bands who has released more B-Sides than A-sides. Before the release of their recent album "The Boy With No Name" they had put out a total of 49 songs through official albums. On the flip side (pun intended), they've released 54 B-Sides. Either they're a band working too much overtime, or they're in desperate need of a better record contract.

I've split the next couple of days into a few posts. For fun I've split the 4 eras into their own albums (Bad Feelings, The Woman Who, The Highly Visible Band, and 12 More Memories)

Here's Part One - The 11 Best B-Sides From The Good Feelings Era:

Email ThisBlogThis!Share to TwitterShare to FacebookShare to Pinterest
Labels: Travis