The Unknown: Public Affection - Death of a Dictionary 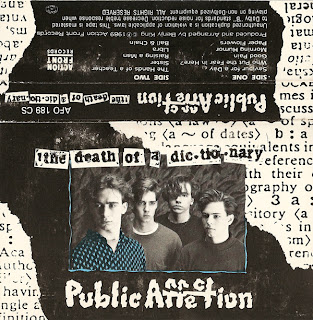 According to Prince, the internet is dead.  Itunes is about to go the way of MTV and the Dodo.  And you know what, he may be onto something.  The internet itself is not dead.  But getting music via the internet may be hitting its peak.  It's too easy to get music on the internet.  There's too much of it.  And when you have too much of something, you stop appreciating it.  There was a time when getting an album was an event.  You look forward to it for weeks.  Saved up for it.  Even waited in line for it.  Then when you got it, you listened to it...over and over.  All the way through.  You didn't listen to 30-seconds of a song than skip ahead.  You cherished the whole album.  That doesn't happen anymore.  It means...people just don't care.  Or do they?

I picked up Public Affection, Live's first demo album, 15 years ago.  It took me months to find.  I asked friends.  Friends of friends.  Even random people at concerts.  I finally found a cousin of an ex-roommate from South Carolina who burned me a copy and mailed it to me.  Getting a copy was like finding buried treasure.  I listened to it religiously when I got it.  More than their regular albums.  Because it was mine.

Now, getting the album is easy.  You just need to type the album name into google.  And spend a few minutes downloading.  And you have instantly what took me months to acquire. It's just not the same.

The internet may not be dead...but it is time for someone to kill it.

Here is Public Affection - Death of a Dictionary:

The internet and music is a double edge sword.

First I agree with your analysis about looking forward to head to a music store, browse and then had pride in buying a CD or Vinyl.But w/o the net I would so miss all these new indie bands who make great music or offer rare recordings that you would not normally be aware of!

Of course - times have changed - kids have purchase power and this generation is about ease - so it might be difficult to get rid of the net!