The 11 Best Guest Spots By Eminem of the 00s 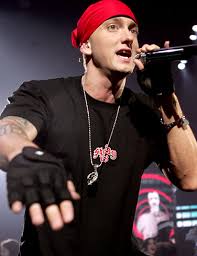 It's great to see rock stars who don't take themselves too seriously.  This week, the Foo Fighters tour rider was leaked to the internet.  For those who don't know, a tour rider gives venues specifics on what artists want in their dressing room when it comes to food and drink...and what accommodations they need for their crew.  Nothing too scandalous for the Foos, in fact, their rider makes me like them even more.  Instead of sending a typical tour rider, telling venues what they wanted in things like...words, the Foos sent out a coloring book.  You check it out here at the smoking gun.

As serious and as angry as rock music can be at times, it's refreshing to see artists having a little fun with their celebrity-hood. Eminem is also one who likes to play a joke here and there.  In fact, he's the first one in line when it comes to making fun of his own fame.  And it doesn't stop when it comes to the humor on Em's new EP with Royce 5'9".

Here are the 11 Best Guest Spots by Eminem of the 00s:

Email ThisBlogThis!Share to TwitterShare to FacebookShare to Pinterest
Labels: Eminem

I couldn't believe you left out Dead Wrong. But looked it up and saw that it is from 1999. Definitely my favorite guest spot of his. Your list is pretty tight.