The 11 Best Songs By Jane's Addiction 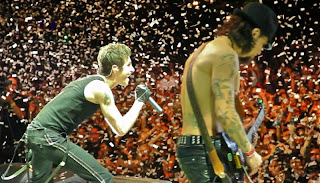 One of my friends in college, praised Jane's Addiction as the greatest rock band of all time.  He said there has never been a band like them and there will never be another like them.  When Jane's Addiction broke up in 1992, he said he would never see the band reunite or buy another album if they got back together.  To him, Jane's would always be that eclectic spirit that was frozen in time between 1988-1992.  There was something mysterious and magical about that band and trying to recapture it would only be insulting to what the original did.  I didn't really get what he was saying until their album, Strays, came out.  I like the album.  But it's not a Jane's Addiction album.  It's a rock album.  Jane's was something more.  Song structures were just suggestions.  Conforming was for glam metal.  You could maybe compare them to the alternative vision of a Velvet Underground but even that would be forced.  There was something pure about their music.  And it belonged to our generation.  As I grow older and see the world of music evolve around me, I can always look back to the days when Perry Ferrell could do no wrong because you had no expectations about what he would or could do.  Whatever path he chose, you would follow and you were better for it.  I always welcome a new Jane's Addiction album (especially when it's released on my birthday) but I think what I'm most excited about is going back and re-listening to what made them so great in the first place.

Here are the 11 Best Songs By Jane's Addiction:

I wholeheartedly agree that the reunited Janes pales in comparison to that initial era. Glad to see that your list is strictly from that time. Jane says would be my top choice but anything from those first 3 is near perfect.