The 11 Best Songs By the Dixie Chicks 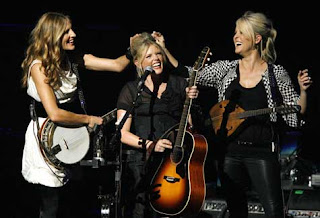 Up until this week, I thought Benghazi was that good BBQ place across the way from the Jungle Boat ride at Disneyland.  Turns out I was wrong.  I've been reading up on the whole Benghazi situation and I think I've learned what the biggest threat to the American government is....it's the American government!  Now I'm not trying to say the whole situation is Obama's fault, not his fault, that there's a conspiracy or not a conspiracy...leave that to the non-music bloggers.  What I find interesting...is that no matter what anyone does in government...there's always someone out there who considers that person to be the worst thing to ever happen to this country and that there very existence threatens the foundations of America   Eight years ago it was George Bush, Dick Cheney, John Bolton, Condi Rice...then it was John McCain, Sarah Palin, Paul Ryan and Mitt Romney.  Now it's Obama, Hillary Clinton, John Kerry, Barbara Boxer, Harry Reid,  and Nancy Pelosi.  For some reason, it's like people thrive on finding someone to blame for all of America's problems...as if it's ever one person's fault.  Because if it's someone else's fault then it can't be theirs.

Here are the 11 Best Songs By The Dixie Chicks: