The 11 Best Song By Tripping Daisy 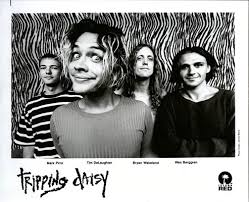 The career of Tripping Daisy can be summed up in two words:  Polyphonic Spree.  During Daisy's '90s career, it was difficult to gauge their musical style because I'm not even sure the band knew what their sound was supposed to be.  They changed their style more frequently than Lady Gaga in a supermarket. Their first couple albums sounded like a combination of the summertime rolls of Jane's Addiction's psychedelic ripple and the metallic transmissions from whatever planet The Flaming Lips were living on.  Their one radio hit "I Got A Girl" sounded like it was made in a lab in the basement of a record label's A&R department where bands like Sponge, Eve 6, and Local H were created.  Tripping Daisy fought back.  On their third album, Jesus Hits Like an Atom Bomb, they dove head first into the sonic boom of what would later define the pop sugaryness of lead singer Tim Delaughter's '00s band, The Polyphonic Spree.  It was a trippy journey with the band embracing their inner Coyne.  The problem was the album was unmarketable.  How unmarketable?  The album is currently unavailable...anywhere.  The label buried it, even though it's considered to be the band's creative peak.  Then on the final album, when they aimed to expand on their newly invented sound...the lead guitarist died.  Probably from exhaustion of having to play "I Got a Girl" a billion times.

Thus, the Polyphonic Spree was born.  It wasn't Tripping Daisy re-invented.  It was a whole new level of tripping out.

Posted by acompleteunknown at 7:30 PM