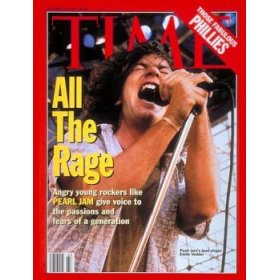 Back in the Fall of 1993, Pearl Jam graced the cover of Time magazine, ushering in a new wave of rock music for the masses. Alongside Pacific Northwest brethern, Nirvana, they took the world by storm. And beside bringing great powerful 70s rock energy that had been missing from the radio scene in over a decade, they returned to giving the fans a little something back: they included them. Say what you will about these grungsters but when everyone else was falling in line with Ticketbastard's excessive service charges, they were the only ones to fight them...in court! They were the first to "officially" allow bootlegs of their concerts and fully supported file trading while others were suing their fans.

But jump forward 15 years, Pearl Jam is the last grunge band still pumping out music (Mudhoney, too, but not as visible). This week they released their 8th studio album if you don't count Lost Dogs. It has received great reviews from everyone. But being a Pearl Jam fan through the Binaural and Riot Act years, it seems like critics just forgot about them and are now rediscovering the band. Because this album is no Vs. It's no Vitalogy. If anything it's not their worst effort but it falls safely in the middle. The weird thing is Eddie Vedder has gone away from the voice that made him a household name. It's as if Grammy cursed him when they awarded the band for "Spin The Black Circle" because since then, Eddie seems to prefer his off pitch scream to his sinister howl heard on Alive, Black, Jeremy, and hundreds of others. It's not bad on one or two songs but a whole album with that sound...well, you be the judge. The music is some of the tightest in a decade but the vocals get tedious...sometimes.

1. Life Wasted - Spin The Black Circle meets Leaving Here - been there heard that...
2. World Wide Suicide - I feel like I've heard this song before...like ten seconds ago
3. Comatose - Third time is the...same. They tried this on Binarual. Start the album with three identical sounding songs. Who do they think they are? Bad Religion?
4. Severed Hand - Using a Smells Like Teen Spirit riff, they punch out one of the gems on the disc. I could see this being a b-side on Vitalogy or an album track on No Code.
5. Marker In The Sand - Reminds of the song Smile...just not as good.
6. Parachutes - A remake of the song All Those Yesterdays. What? It's not a remake? Oh, nevermind.
7. Unemployable - The second decent track of the album. but don't get excited, 10 years ago, this would have been a B-side.
8. Big Wave - Another surfing song. Better than Gremmie Out Of Control but that's not saying much.
9. Gone - Holy crap, a song where Eddie isn't screaming. I'm going to savor this moment and listen to this song twice.
10. Wasted Reprise - In case, after hearing this song three times to start off the album, you already forgot it, they included it one more time.
11. Army Reserve - Remember that song No Way? Yeah, neither do I.
12. Come Back - Finally, Eddie doing what he's best at. Think Garden infused with some down home Gospel.
13. Inside Job - At first you think the band is following with their roots delivering a mellow finale like Immortality or Indifference, but the song explodes at the end...just begging to be played as an encore at an upcoming concert.

Here are some rare tracks by PJ and Eddie. Featuring a demo outake from X tribute album (Poor Girl), the band's first b-side, a Tom Petty cover, a Ramones cover, and the unaired Neil Young cover from MTV unplugged.

Mwaah ahh ahh welcome to the world of blogging! And yes I agree the ablum is just kinda average. Guess we can never have 'ten' again. :(
-Heather

No way is Yield the worst PJ album.