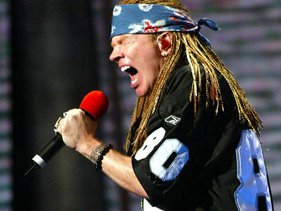 In September of 1991, thousands of us waited in line outside record stores to purchase the follow-up to Guns N' Roses hard rock opus, "Appetite For Destruction." It was on this night that history was made. "Use Your Illusion I & II" became the first midnight release of any sort of any entity. This began a trend that dominated new music releases for most of the 90s and has since spilled over into DVDs (Star Wars) and even book (Harry Potter) releases. But this wasn't all. The release of the album marked the last time GNR fans would hear an original album from the band that decade. And the decade had only begun. Sure we were given a cover album and a live album but the closest token we were given was the single new song "Oh My God." And that was cryptic at best...and now, it's over 7-years-old.

Since their last release, GNR has lost their guitar virtuoso in Slash, their 2nd drummer Matt Sorum, and their stalwart bassist, Duff McKagan. Oddly, besides Axl, the only other semi-original member is Dizzy Reed, the keyboardist, who was brought in for Use Your Illusion over 15 years ago. So what has the band been doing for the past 15 years? And does a band that has one original member deserve to keep the same moniker? It's kind of like if Paul McCartney had kept the name The Beatles when he formed Wings.

We can argue semantics until we're blue in the face but that's not why we're here today. We're here because it seems like a new Axl Rose Band...I mean , Guns N' Roses album is finally about to emerge. The internet has been flooded with leaks in the past few months. Coincidentally, this has happened only a few weeks prior to GNR's first tour in 4 years. Now we all know despite Axl's Howard Hughes like actions, he's a very smart guy when it comes to the ways of the world. Especially, the media world. Would it be surprising if he had leaked the material on purpose? It would make sense and would be the perfect situation. He could gage fan reaction by scouring the online message boards. If the reaction is positive then he knows he's onto something. If it's negative, he can just dismiss the tracks as "working demos" and go back to the studio to fix them up...or dismiss them all together. Look at how they came out. First There Was A Time and IRS. The buzz was pretty solid. Then, Better comes out, receiving the best reaction yet. So we get another track Catcher in the Rye but the reaction this time is lukewarm at best...and all of a sudden, the leaks stop, even though we were told there were two more songs out there that never emerged. Why? What happened? I can't imagine that the original leaker grew a conscious and stopped leaking the material.

Now I haven't heard the official album. All I've heard are the leaked tracks alongside the live tracks from a few years ago. *And this was played on a boombox in a coffee shop by someone I don't know. * So I'm giving a bit of room to the poor sounding demos and booted live tracks.

For the most part, the songs sound much more like Axl's songs from the Use Your Illusion years but far darker, though there are some steps into the light. He seems to be pushing the envelope in many ways not resorting to throwing out 12 ABAB pop songs like 99% of the musical artists out there. Maybe it takes 15 years to reinvent 50 years of pop radio. Of course, only someone like Axl Rose would actually attempt to do something about it.

1. Oh My God - At first listen, I hated this song. A jumbled mess of NIN influenced nonsense. But after a few listens, I realized, I couldn't have been more wrong. I wanted a straight forward rock song but Axl gave me a textured, structure-bending industrial sounding ditty, layered with off tempo angst. The song is seven years old and becomes more relevent with each passing day. Axl was just ahead of his time. (Double Talkin' Jive mixed in a blender with NIN's Perfect Drug)
2. Bettter - The tender opening brings back the closing of Estranged (intentionally done?) and it's broken up with the ferocious chorus ladened with Buckethead's guitar frenzy. (Estranged with My Michelle's chorus)
3. There Was A Time (T.W.A.T.) - Probably the best of the new tracks. It's the only one to return to the soaring melodies heard on previous GNR releases. Axl's voice sounds great over the finale. (Take the music from 2nd half of November Rain mix in Axl's Sweet Child vocals)
4. I.R.S. - Not as melodic as something from Appetite but it pulls in the same energy, coming off much darker and bleaker. (Think the "You know where you are" part of Welcome to the Jungle with a bit of Black Leather thrown in for taste)
5. Catcher in the Rye - How come every song that has a "Na-Na, Na-Na" part sounds like it has to be on AM Radio? (So Fine)
6. Madagascar - Played from about 90 seconds on the MTV awards, a sweeping ballad in the Axl Rose vein. (Don't Cry with a broader scope)
7. The Blues - Another song with light melodic fare like Catcher. Heel-tapping time. (Yesterdays 2006)
8. Chinese Democracy - This is the first song that could have been on Appetite. Fierce, raw, ripping guitar thrusting forth a charged up energy. This might be the closest we ever get to old GNR. Enjoy it while it lasts. (It's So Easy meets Crash Diet - yeah, I went there)
9. Rhiad and the Bedouins - A very distorted live track. From what I can tell it has a throbbing rocking thoroughfare with Axl's howl leading the way and a mellow chorus that gives the listener a second to breath before erupting again. (Elements of Pretty Tied Up and Big Dumb Sex)
10. Silkworms - Hopefully this song is a throw-away. (think My World but longer)

Here are some solo Axl tracks since...this really is a solo album...

1. Under My Wheels - Axl Rose and Alice Cooper
2. I Did You No Wrong - Steve Jones and Axl Rose
3. Free Fallin' - Tom Petty and Axl Rose (live from MTV)