THE BAD: The Sound of Animals Fighting - Lover, The Lord Has Left Us 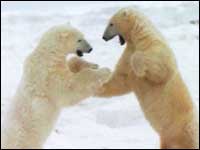 The best date I ever had involved free sushi, backstage passes to a concert, and a long talk on a beach about Pearl Jam, The Beastie Boys, and why John Elway's Denver Broncos rule the known universe (yeah, this was a little while ago). It was the kind of date that leaves you counting the very seconds until you get to see the girl again. And I waited. The anticipation was torture. Nothing else in life mattered except seeing this girl again.

Finally, the next weekend came, and like a kid on Christmas, I made giant plans. I wasn't going to let this girl go. Only, there was something I didn't know about her. You see, she was a complete psychopath. She screamed at the waiter at the restaurant for looking suspicious then we spent the rest of the night driving around town looking for an all-night sporting goods store that would sell her ammo for her semi-automatic machine gun she kept in the trunk of her car just in case the waiter came after her later that night and tried to kill her. I kid you not. Our most interesting conversation was about how the Jews were plotting to take over the world. Luckily, I didn't tell her I was half-Jewish.

This crazy girl is the Sound of Animals Fighting's second album. Their first album(EP) was such an amazing venture into uncharted musical territory that the avid listener couldn't help but be excited about the thought of a full length album from this indie-rock supergroup. The biggest problem with this album is that it sounds nothing like their last album. Okay, that's not the biggest problem...that's one of the 500 problems with the album. It's like they went one-step off-centre with their last album then went 80 steps off-centre with this one. And that kills the listenability of the album. There's no focus. There's momentum. There's nothing holding it together except for some random blips and beeps from a used computer. Maybe the album isn't terrible but after following their last effort, it's a complete disappointment.

1. Intro - Noise. Skip it.
2. Un'Aria - A bad opera singer. Skip this one too.
3. Skullflower - It's the kind of song you would except the rebel teenage kids of Naboo to listen to (and no, not the Gungans). The vocals soar over misjointed tech-savvy beats while a Middle-Eastern chantress guides the way. It's interesting...but just barely.
4. My Horse Must Lose - A throw-away beat that mimics modern Depeche Mode and Moby while a Beta Band styled singer croons over it. I feel like it's going somewhere but by the end of the song, I'm still in the same place.
5. Chiracho Summit - A girl rambling and bad horror effects in the background. Stay away. Far away.
6. Horses in the Sky - It sounds like a mash-up gone wrong. Rich melodic voices
mashed with synth music from a 10-year-old screwing around on his older brother's keyboard.
7. Stockhausen, Es Ist Ihr Gehirn, Das Ich Suche - Chester Bennington's wannabe little brother sings while some girl yodels and it's all set to an musical display that sounds like there's assembly line for auto parts coming out of your speakers.
8. Prayers On Fire - It's the Norah Jones of the Middle East...
9. The Golden Boy That Was Swallowed By The Sea - Normally when static drowns out a song, it's a nuisance. Here, it's a blessing.
10. This Heat - Epic like Smashing Pumpkins "Glass and The Ghost Children" but lacks the vision and structure.
11. Un'Aria Ancora - We get to hear this terrible song twice. What a lucky day.
12. St. Broadrick is in Antarctica - Did someone leave the reel running in the studio while monkeys came in and started banging on the instruments?
13. The Heretic - Whoa...whoa...stop. This song is pretty good. Did I switch playlists in my itunes...this can't be the same album. Wow, it is. If Radiohead and Sigur Ros had a kid, it would be this song.
14. There Can Be No Dispute That Monsters Live Among Us - Remember when Matthew McConaughey was caught playing bongos naked while stoned? He was playing this song.

Mp3s of the Caribbean...

You have absolutely no idea what this album is about. First of all, you're listening for the sake of others, not for the sake of yourself. Do you ever let go of your capacity to judge? Does your internal dialogue ever cease? Doubtful.

This album takes work to understand, and half the battle is understanding yourself. You obviously have a pretty rigid definition of music (check out the last song on the album) that you need to throw out the window. Let go of preconceptions and let the sounds soak in and take hold, and see where it takes you. This is potentially one of the deepest pieces of art ever made. You need to find translations for the Sanskrit, the German, the Farsi, the Japanese, the Navajo... Listen to the backwards sounds, the slow motion... and most importantly just listen without thinking "wow this singer sounds f'd up" or "this beat is whack". I assure you, there's more depth to this album than you'll be able to comprehend.

I kind of doubt you're the type of person that'd be able to feel it though, considering the entire point of your blog is judgement.