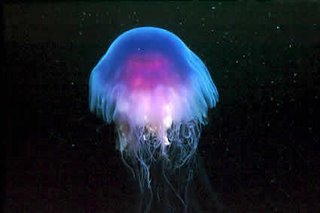 It's not everyone who will admit to owning a Wings CD. It's not everyone that will admit to liking the band Wings. So when you come across a band who not only considers Wings to be a major influence but flaunts it like a new Prada purse, you're not sure whether to be scared or intrigued. Welcome to the strange world of Jellyfish. They came. They went. But their legacy has lived on. They were pegged as a Beatles knock-off when they arrived during the last throws of the glam metal scene of the 80s. A psychadelic, strange dressing, goofy sounding band...they were scoffed and mocked. They were victims of bad timing. Had they arrived two years later, their Supertramp-Queen-Elton John-Wings sonic impact might have actually been appreciated. And who knows, we might be praising Mother Love Bone's new release instead of Pearl Jam's. Oddly, MLB wasn't a far cry from Jellyfish. They both worshipped the band Argent. (but that's another story for another day) Until then, here's my second pick for one of the 90s 11 most underrated albums. (the first was Triplefastaction's Broadcaster).

ezarchive is too busy sucking ass and I can't get any Mp3s uploaded. Sorry.

Nice to know I'm not the only one in the world that understood this band and their diverse influences and appreciated them!

Listen to a podcast review of Bellybutton by Jellyfish on Dig Me Out at digmeoutpodcast.com, a weekly podcast dedicated to revisiting lost and forgotten rock of the 1990s.