THE UNKNOWN: The Sounds of Animals Fighting - Tiger and the Duke 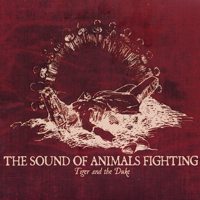 You know when you meet someone and they are incredibly knowledgable about a subject, and you never in a thousand years thought someone would know jack about a subject like, Italian bread-making or the flora and fauna of sea coral. But here they are, thoroughly wise to the topic to the point that all you can do is sit in awe and respect. Well, that's the Sound of Animals Fighting.

They formed in secrecy. Its members coming from other well-known bands, hoping to do something unique without fueling the ire of their respective labels. Their goal is to create music outside the typical pop radio realm. Testing the waters of traditional structure, they pound into their songs like a scupltor bashing into a mound of granite. They whip across the sonic landscape like a painter slashing at a canvas. Their creation, though considered "screamo" is far from it. Think Pink Floyd and Fugazi combining forces to create what I like to call "punk floyd." The album consists of 4 songs (not counting the 5 short instrumental interludes). And though the listening experience is brief, it manages to leave you breathless.

The Tiger and the Duke

1. Act I: Chasing Suns – Think fugazi sent through a prog rock blender.
2. Act II: All Is Ash Or The Light Shining Through It – An intro that borders on the romantic side finds its bearings with blasts of screamo and back beat that would make Les Claypool proud.
3. Act III: Modulate Back To The Tonic – Dualing spoken word is merely filler inbetween the energic thrust of the chorus that leaves you begging for more.
4. Act IV: You Don’t Need A Witness – Returning to the beat of the first song, the album takes a cyclical approach to the theme only the song doesn’t have the strength or focus of its predecessor.