The 11 Best Songs By Thursday 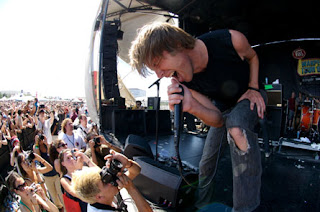 Thor has always been the comic book that I never thought would get it's own movie.  I wasn't even sure he would make his cameo in the Avengers movie.  But the movie is getting great reviews, and some are saying it is one of the best comic book movies...yet.  Thor isn't late to the comic book movement...but may be coming in to put the cherry on top.

The band Thursday has a similar story. When they came onto the emo scene, they were seen as the artist who was showing up late to the party.  They were well-liked but no one thought they had a chance to last.  Now, a  decade later, the band is still around, better than ever, and now getting something that alluded them when they first came...respect.  The new album, No Devolucion, is getting great reviews.  Even the critics who never bothered giving Thursday a chance are giving this album a big thumbs up.  Like Thor, coming late the scene doesn't mean you're not as good as everyone else...there's actually a benefit to it.  You get to see what everyone did wrong, and if you're insightful, you'll make sure you don't make the same mistakes.

Both these guys seem to have heeded the mistakes of their predecessors.  And, on a side note, Thor means Thursday.  True story.

Here are the 11 Best Songs by Thursday:

Email ThisBlogThis!Share to TwitterShare to FacebookShare to Pinterest
Labels: Thursday

I love your analogy! Now this is a good band....I had tix to see them in 2004 in Reading and missed them...they were one of the reasons I got tix - now this band is "emo" defined!