The 11 Best Punk Songs By The Beastie Boys 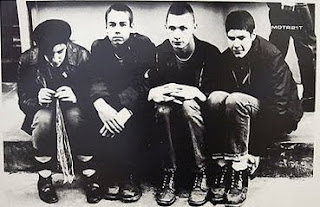 This week Miley Cyrus did the ballsy thing and took her teen pop shtick and layered it all over Nirvana's classic "Smells Like Teen Spirit."  This prompted Rolling Stone to do a list of the worst/interesting covers of the 90s anthem.  Tori Amos succeeds only because she re-invents the song.  Bruno Mars does a decent job, but he only succeeds by mashing it with Michael Jackson.  And Kathleen Hanna's version isn't bad, considering she was the inspiration for the song...also her story that goes with the song is priceless.  This got me thinking how iconic songs are impossible to cover.  SLTS wasn't just a well-written song, that is definitely part of its appeal, but there's more to it.  The song was huge because of its delivery.  Cobain's performance of the song is as iconic as piece of its songwriting.  There are good songs and there are good performances.  Good songs can be covered.  Good performances are untouchable.

You will never hear a good cover of the Beastie Boys.  There is no other group on the planet that could do reasonable justice to any of their tunes.  The Beastie Boys themselves are iconic.  And though their songs are a memorable part of our society, it's their unique delivery and performance that makes them unlike any other group...rock, rap, punk...or whatever.  They are their own genre.

Here are the 11 Best Punk Songs By The Beastie Boys:

you really gotta put rhymin and stealing on this list.

Pete, not even the faintest idea what punk is?

Nothing To Say is a killer.
I's swap out Jimi with Ode To and maybe Transit Cop with Egg Raid on Mojo or White Shadow. To each his own though. Great list

rhymin and stealing is not a punk song.

Great list.
I'd swap out Jimi for Ode To (my fave track off Pollywog Stew), but that's just me.

Nothing To Say is a ripper.

After hearing Lee Majors on the new record, that would make my list.