The Unknown: Middle Brother - Live at the Paradise 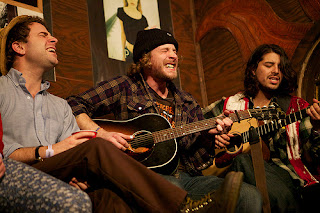 With a slower music week, I decided to go back and hit a couple of releases from the past few weeks I may have missed.  First up is Deer Tick's new album out about two weeks ago.  When Middle Brother's new album came out a few weeks ago, I did a list for Deer Tick.  Now with a new Deer Tick album I figured it's only fair to do a Middle Brother post.  With only one album...can't do a best of...so I hope this concert is a decent substitute.

I am always intrigued by how bands with one album decide what songs to play in concert.  Why not just play their album from beginning to end?  What's the point of mixing it up in a different order?  Shouldn't the tracklist of songs on the album be the best order for the songs?  If not, then why put out the album with the songs in that order?  It's like watching a movie out of sequence on DVD versus the way it was shown in the theaters.  That would just be weird...yet with music that's normal.

nice, one of my favorite albums from this year