The Unknown: Tegan & Sara - The Pro 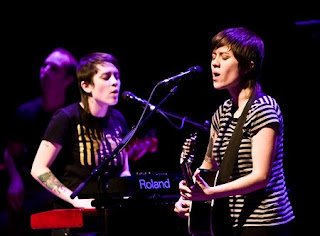 There's some sort of adverse reaction I have to live albums. Maybe it's years of buying them and expecting great things...only to listen to them one time and cringe at the thought of ever listening to them again.  The only live albums that I have ever really found have repeat listening potential are acoustic albums.  Mainly, this is because the songs sound much different than their original produced counterparts.  That's why when I first heard about the new Tegan and Sara album my instant reaction was one of disappointment.  Then, when I learned that it was an acoustic performance, my interest was re-peaked.  Granted most of Tegan & Sara's songs are already riding the line between acoustic and produced, this definitely lured me in.  The new album is listenable to say the least.  I'm not as blown away as I hoped...but I am looking forward to giving it multiple spins.  Maybe it's because their identical twin sister lesbians...and in the back of my head, I think that if I listen to the album...maybe I have a chance.

Buy Tegan and Sara's new live album, Get Along, now!!!
Posted by acompleteunknown at 6:29 PM

Email ThisBlogThis!Share to TwitterShare to FacebookShare to Pinterest
Labels: Tegan and Sara