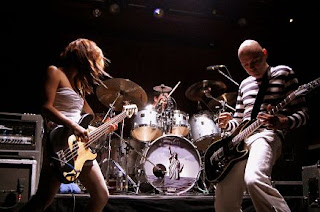 The post break-up years of the Pumpkins might as well be considered the dark years.  Billy has had to endure years of criticism for everything he put out.  Zeitgeist was criticized for sounding too much like the original Pumpkins (true story).  Teargarden was criticized for being given away for free.  I remember reading one review where the writer said that "A Song For A Son" was an excellent song but he hated it because it was made by Billy Corgan.  Billy just couldn't win.  But when you listen to the material with a unbias view...it's surprising how consitant the sound is to the 90s Pumpkins.  They may be the only band of their peers who has maintained such a solid hold on their rock roots.  Listening to the new reissues back-to-back with stuff like Zeitgeist and Teargarden...there's a definite kinship to the material...it's not like Pearl Jam or Stone Temple Pilots who have abandoned the sound that made them who they are.  Along those lines, the best thing about the reissues...the reason why we're here....is that they haven't done the same thing as the other recent reissues.  Billy has fought the loudness war.  He didn't make all the music levels blasted up.  The highs are still high and the lows are still low.  As criticized as he is for being musical pariah...he sure knows what the hell he is doing.

Here are the 11 Best Songs by Smashing Pumpkins (Post Break-Up):

I think my biggest annoyance with Zeitgeist is the mix, Billy's main vocals are always so loud over everything else. it really pulls you out of the music. Other then that I like a lot of the songs. I also thing the teargarden stuff is the right path. And my favorite post-break up song is G.L.O.W.'s b-side "Super-Christ". I don't care much about the lyrics, but the guitar rock insanity that happens in this song is really awesome. I also thing Billy focuses on the word "love" a bit too much.

All that aside, I saw the new pumpkins line-up about a month ago and it was amazing. They played a ton of Siamese dream and some Gish and a fair amount of b-sides from Pisces with a good mix of new material and a couple of melon collie odds and ends. Only one major hit, Bullet with Butterfly Wings as the finale. Sorry this is a bit rambly, g'night.