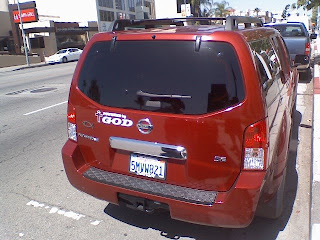 Today, I saw a car with a bumper sticker that said..."powered by God." What the hell does that mean?

Does the car run on empty prayers and Hail Marys? Seriously...that's just a stupid bumper sticker. I may not be into the whole God scene...but at least I can respect (or understand) the little fishy. You're telling the world that you believe a blonde hair/blue-eyed savior was born to Jewish parents in the middle east. I get it. I don't agree with it...but I get it. But powered by God...do the people who have this bumper sticker even get the irony?

Cars run on oil...gas...fossil fuels. Fossil fuels are made from dinosaurs. Dinosaurs are creatures that ruled the Earth millions of years ago until they all got fat and lazy and then went extinct.

Here's the paradox...according to Christianity and most religions, the Earth is only a few thousand years old...therefore negating the existence of dinosaurs...which would in turn negate the supply of fuel to their cars...that are "supposedly" powered by God.

While I'm glad to see someone else share my appreciation for With Teeth, I think The Slip belongs somewhere in this list.

wow... i truely don't agree w/ this list... but.. its all god. i've never been a big fragile fan. but i was listening to into the void today and decided i needed to give it another shot, so its on my list of things to re-listen to. i definitely think ghosts is way better than the year zero remix album but definitely agree that the mix album is better then the album itself. and that ghosts is better then it but truely. who gives a crap, its all opinion. thanks for the fun post! the slip kicks year zero's ass!!