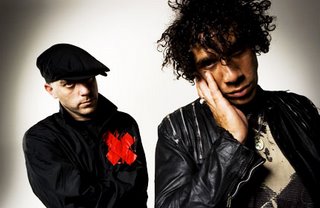 Sure this album came out a few months ago (6 maybe) but this summer has sucked when it has come to music. So instead of forcing down something rancid to review, I'd rather go back and review some albums from the first few months of 2006.

You remember when you were in high school and you bought a really cool shirt but no one seemed to notice. Then a few years later your younger brother started wearing the same shirt and everyone thought it was super cool. And all these hot girls started coming up to him because of the shirt, when you never had girls that hot pay attention to you. Meanwhile, you can't help but scream out in your mind, "that's MY freaking shirt!" Well, that's She Wants Revenge.

The band carries on the time honored tradition of copying the sound of other bands and passing it off as their own. Now there's nothing wrong with that, good artists borrow, great artists steal. Oasis, Green Day, and the Black Crowes have made careers of doing that. At least they admit what they are doing and they've picked some good bands to mimic from. So for all you tykes who think they are a new band with a new sound, here's a research list for you to find the originals. For all of us who have kids and can't afford new CDs, take my song translations and make a mixed CD. It'll be just like owning the album.