THE BAD: The Backstreet Boys - Black and Blue 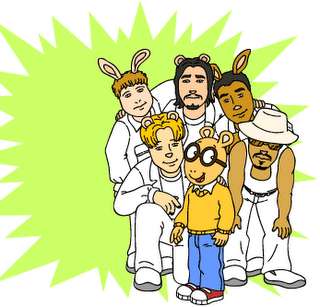 *Sorry had a problem in a copy paste accident. This will be the last retro review before some new ones tomorrow.*

Remember how embarrassed our parents became when we asked them questions about the 60’s? “Did you ever smoke pot? Did you ever burn your bra? Did you ever own a Volkswagon van?” Imagine how difficult it is going to be for us when we have to answer our kids when they ask, “Why did people in the year 2000 have such bad taste?” And, no, I’m not talking about George W. Busch. I’m talking about the fad that has overstayed its welcome. They are five young men with tendencies toward pedophilia. That’s right, it’s the Backass Boys.

2. Shape of My Heart – Chinese water torture has a better rhythm than this song.

3. Get Another Boyfriend – Is this a cover of Matthew Wilder’s “Ain’t Nuthin’ Gonna Break My Stride?”

4. Shining Star – Does anyone else find it disturbing that these men, who are in their late 20’s, have a loyal fanbase of 12 year old girls? Eminem is a bad influence because he uses four-letter words, but allowing MTV to use the Backstreet Boys to promote statutory rape is okay. Our society really has its priorities out of whack. I guess it makes sense that George UU. Bush won the election.

6. Answer To Our Life – I don’t know about you but the answer to my life would be to hang these gents by their ears from a playground swing set and throw razor blades at them…forever.

7. Everyone – This song softly weaves in the style of El Debarge with its NKOTB musical composition.

8. More Than That – I hate this song. This is about as bad as it gets.

11. Yes I Will – Let’s all review the rules for justifiable homicide. I think we can make a case.

12.It’s True – If you take a moment and you actually pay attention to the lyrics, you realize that they say the exact same thing in every single song. “I love you. You’re wonderful. There will never be another one but you.” Now this becomes profoundly disturbing, since there are 5 guys singing the song to one person. Of course, unless they’re singing the song to each other.

13. How Did I Fall In Love With You – I’ve decided not to review the last song, because I’ve wasted enough of my life listening to this CD already.

How this album ranks against her other releases…

You seriously want some MP3s from this? Are you kidding? Try this instead...

I really enjoyed looking at your site, I found it very helpful indeed, keep up the good work.
»

Hallo I absolutely adore your site. You have beautiful graphics I have ever seen.
»