THE GOOD: Morrissey - Ringleader of the Tormentors 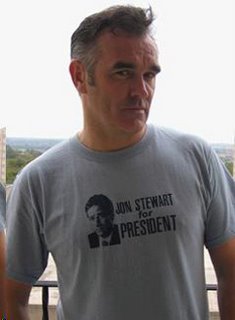 Why do people love Morrissey? And I don’t mean, why do they love his music? I mean why do people cry hysterical tears when they see him sing as if their parents were just killed in a car accident? I like his music…I don’t break out the Kleenex box when Everyday is Like A Sunday bursts through the stereo speakers. So what is it? Is it his masculine charisma? Doubtful. The guy’s a sworn celibate. Is it the smooth texture in his voice? Possibly. The guy can definitely croon like nobody’s business. Or is it the fact that the guy seems to be one of the few singers who can emotionally connect with his audience? No, it’s none of these.

No matter what the guy is singing about, he makes you believe that he’s in love with the subject matter. Whether he’s singing about gang violence, fat people, hairdressers, or even the Bush administration, Moz makes you believe that this subject is his one true love and he would die just to prove his undying love to it. But maybe it’s more than that. Maybe it’s that Moz really does love everything and everyone. Maybe he’s in love with the world. And it’s hard to hate a man who has nothing but love in his soul. (if I write like moz sings, think it will boost my readership?)

Ringleader of the Tormentors

How it compares to his other releases…

All artists are passionate....makes you wonder what the other so called "artists" are??:)