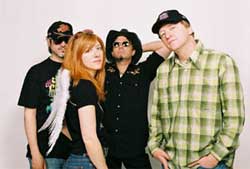 Once upon a time, a little band called the Status Quo did a song called “Pictures of Matchstick Men.” It was 1968 and everybody was either stoned or fighting Communism in a far off jungle. Little did they know that 20 years later, it would be covered and practically launch a career for a young David Lowery. At the time, David was singing for the group Camper Van Beethoven, who reached their first batch of notoriety with that song. Too bad they decided to break up because there’s no telling how far a band with a violin player can go. Well, flash forward to Lowery forming a new band called…Cracker. As alternative music hit the mainstream, Cracker made a name for themselves instantly with the hits "Teen Angst" and "Low. " They were minor hits at best only because they were considered grunge-lite when they were anything but. Sadly, the band seemed destined for rock mediocerdom. Only, no one told Cracker. Focusing more on the country side, they continued to release solid material until the sound they had cornered the market on, was suddenly being peddled by others like Wilco, Son Volt, and Ryan Adams. Ten years later, they were hip again. That is until now. Greenland is decent but you can feel them slowing down and starting to veer off into alternate directions, which can sometimes be good for a band but other times can be disasterous. For now, let’s just enjoy what we have.

For the audio nuts

New Cracker Album - "Sunrise In The Land Of Milk And Honey" hits stores 5/5/09. Let me know if you'd like a promo copy for Review or any other materials for that matter. bruce@slgmusicus.com