THE BAD: The Vines - Vision Valley 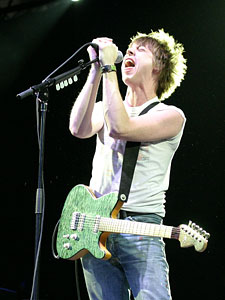 When people get sick then try to do things they used to, deep down inside you root for them to do a good job, but you know it’s never going to be as good as when they weren’t sick. This brings us to The Vines. Recently, the lead singer was diagnosed with Asperger’s syndrome. Now, he’s most likely had this all his life, including during the recording of the first two albums. And maybe, the reason those albums worked was because he was dealing with the fact that he felt different than the rest of the world and it came through in the music. But now that he knows he’s different than the rest of the world, he’s trying to sound normal…and it just doesn’t work. At all. The Vines started as this Nirvana meets the Troggs, genre-bending band. What they delivered this time around doesn’t even deserve…

….to be mentioned in the same paragraph as those bands. Oddly at 13 songs, this album barely clocks at 28 minutes. Glad to see they put so much effort into it.

Something for your ipod...

I disagree, man. Vision Valley's not as good as their last two albums, but I'm glad they're still making good music. I happened to enjoy this record a lot.