THE UNKNOWN: Ugly Duckling - Bang For The Buck 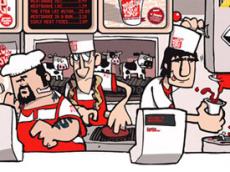 People are claiming to hear hip-hop's death rattle. I think their wrong. If they hear anything that might sound like a rattle, it's the fun-filled beats of our next artist. Meet Ugly Duckling. Three guys from Long Beach, who came together over ten years ago to form a group in the shadows of bands like Tribe Called Quest and de la Soul. But close to a decade later, a sound that was getting a little stale in the mid-90s is making a comeback like a mother...well you know what. One of the freshest and brightest hip-hop CDs of the year. And sure to make your weekend a bit more fun.